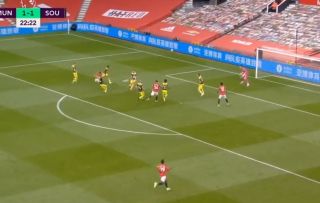 Manchester United were stunned by Southampton’s opening goal but responded perfectly with Marcus Rashford and Anthony Martial scoring to put the Red Devils in the lead.

I was only finished by report on Stuart Armstrong’s goal which saw Paul Pogba caught in possession before United bounced back with two quick-fire goals.

Rashford scored the equaliser after Martial played a short pass to his left inside the box. Ralph Hasenhuttl will be disappointed in his players leaving so much space at the back, up against a United front four that is so deadly at the moment.

Moments later Martial popped up with a screamer and it could go a long way towards putting United in third place if they win the game tonight.

Watch both goals below, courtesy of DAZN: