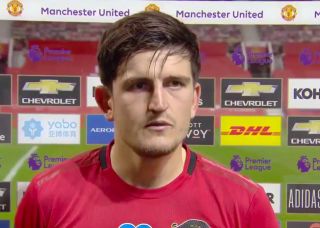 Harry Maguire was despondent on the full-time whistle as Manchester United relinquished a fantastic opportunity to assert themselves as favourites in the race for the top-four.

United looked set to leapfrog Leicester City and Chelsea into third place, but conceded a 96th minute equaliser as they were held 2-2 by Southampton at Old Trafford.

In a gut-wrenching moments for United in their top four hopes, Michael Obamefi sneaked in at the back post to score after James Ward-Prowse’s corner was not dealt with.

United were not short of chances throughout, and were left to lament some poor defending  after left-backs Luke Shaw and Brandon Williams were both taken off with injuries.

Maguire was visibly frustrated in his post-match interview, suggesting there are plenty of areas United must improve on.

Listen to Maguire’s reaction below, courtesy of Sky Sports:

"We weren't at our best, there are loads of areas we need to improve on." 📉

After Manchester United missed the chance to move into the top 4 with a draw at home to Southampton, Harry Maguire gives his reaction on their performance…