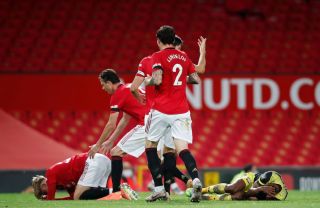 Manchester United conceded a last-minute equalizer to drop points for the first time in five matches against Ralph Hassenhuttl’s Southampton.

While United were far from good enough, showing lethargy while playing out of Hassenhuttl’s infamous press and ultimately conceding more possession and shots than they mustered, it shouldn’t have mattered; two particular officiating incidents should be the biggest talking points of the game.

First, it was Greenwood who fell victim to a foul from behind, courtesy of Ryan Bertrand, while on the ball. Bertrand’s challenge was the foul, but hardly the talking point, as Oriol Romeu then clatters Greenwood and sinks his studs into the 18-year-old’s left ankle long after the ball had left his feet.

The challenge, which rendered Greenwood furious, was not sent to the Video Assistant Referee (VAR) despite clearly being dangerous. It was a very similar foul to the one that saw Arsenal’s Eddie Nketiah sent off last week against Leicester, United’s main Champions League qualification rivals.

Instead of Southampton, it would end up being United to go down to 10-men after Brandon Williams faced a concussion from a 50/50 with Kyle Walker-Peters. Ole Gunnar Solskjaer had made four of his five substitutions until that point, but according to the rules, he had fulfilled his maximum of three stoppages of play to make those subs, meaning that Williams had to depart and United had to finish the match with 10-men.

From there, Solskjaer moved midfielder Fred to left-back as United limped through stoppage time and Michael Obafemi scored Southampton’s equalizer.

The officiating incidents, whether as a direct result of the rules or not, expose the flaws in the existing system of video review and making substitutions.

The fine margins between Leicester, Chelsea and United could be worth hundreds of millions of pounds, and with the level and stakes of supposedly the biggest football league in the world, we have to expect more from our referees, especially when technology is in place to make the correct decision every time.

Secondly and more importantly, though, I felt that the decisions put two of United’s most promising young players in danger. Challenges such as Romeu’s, when uncalled, can lead to others that ruin players’ careers, and years of physical and mental side effects. We are still seeing the effects of Luke Shaw’s 2015 leg break today, and like the challenge that split 20-year-old Shaw’s leg into three pieces, today’s foul went unpunished.

The Premier League is setting a precedent that these types of challenges will not always be taken to task, which enables players to attempt them.

As for the Williams incident, not allowing Solskjaer to make a fifth substitution simply makes no sense; at best, it denies United the chance they deserve to finish the game properly, and at worst, it encourages the player to continue playing through a head injury.

The rule of only three stoppages of play to make five substitutions is supposed to prevent time-wasting, but the injury stopped play for over a minute anyways, and it wouldn’t have taken any time for another player to walk onto the pitch while Williams was walking off.

With such fine margins, every rule that is not in place and every incorrect decision can lead to a moment that destroys a player’s career or a club’s season. VAR was introduced to ensure that players are sent off for committing fouls that warrant it, protecting the Premier League’s talent from facing potentially career-ending tackles. Meanwhile, the five substitutions rule was added to combat added physical stresses created by a congested schedule of games in the summer heat during COVID-19.

The Premier League’s officiating and rules failed on both fronts today, proving once again that significant reform is needed to create a safe and fair league for clubs and their players next season.