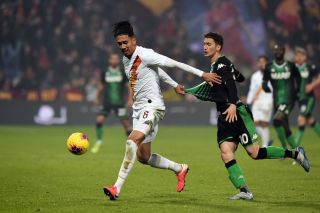 With an unbeaten streak well into the double digits and goals positively overflowing, it’s difficult to criticise Ole Gunnar Solskjaer’s tactics or transfer policy. That said, the Norwegian’s project is only just getting off the ground.

It’s ready to take off from a strong base. Anthony Martial, Marcus Rashford and Mason Greenwood outscore Liverpool’s front three this campaign. Paul Pogba and Bruno Fernandes are developing into United’s answer to David Silva and Kevin de Bruyne. Nemanja Matic, Scott McTominay and Fred offer the boss three viable options in the holding role. Aaron Wan-Bissaka and Luke Shaw claim the starting fullback places with Brandon Williams able to step in for either without the side missing a beat. When the Euros and Copa America kick off in summer 2021, the club may have the number one for three countries on their books, David de Gea for Spain, Sergio Romero for Argentina and Dean Henderson for England.

Yet, there remain holes to be filled. The drop-off from Bruno and Pogba to their supporting cast is steep. Juan Mata can still match them for skill and guile but hardly pace or power, whereas Jesse Lingard and Andreas Pereira are completely out of their depth. Up front, Odion Ighalo will return to Shanghai Shenhua in January.

But centre-half remains the greatest concern. Harry Maguire is proving a solid defender and capable leader but, despite his price tag, isn’t at Virgil van Dijk or Nemanja Vidic’s level. He lacks their consistency and anticipation. Similarly, Victor Lindelof isn’t Rio Ferdinand. Nor is Eric Bailly.

Although he recently reminded reporters and, by extension, his forwards, that current form doesn’t translate into job security at Old Trafford, where Sir Alex Ferguson constantly signed world-class strikers to promote competition within the squad, Ole Gunnar Solskjaer can also apply that philosophy to his defenders. United must focus their investment in this summer’s COVID-19 compacted transfer window on central defence.

Tuttosport recently reported United’s interest in Internazionale defender Milan Skriniar who struggles to find a place in Antonio Conte’s three-man rearguard. Defensively, the Slovakian is roughly halfway between Lindelof and Bailly in terms of discipline and aggression. Given the opportunity, he could be a slight upgrade on either. On the other hand, he’s weak in the air and his aggressive nature too often leads to ill-timed lunges. He doesn’t play under Conte because he can’t be trusted. Even if the Reds can procure him for significantly less than the Nerazzurri’s £60 million valuation, they may end up with an expensive European knock-off Phil Jones.

Conversely, United find themselves deeply engaged in talks with AS Roma to extend Chris Smalling’s Giallorossi loan and attach a mandatory purchase at its end. Given Smalling’s performance at the Stadio Olimpico, that may be a mistake. Yes, Rio’s erstwhile successor on the right side of the Reds central pairing is now 30 and struggled to play out from the back under Solskjaer. That was then; this is now. Smalling learned to play from the back with confidence and composure in Paulo Fonseca’s system. He now anchors I Lupi’s backline and remains a threat in the final third to boot with two goals and an assist for Roma. Bringing him back into the club would add experience and depth to Solskjaer’s rearguard.

There is, of course, the question of whether the player wishes to return. Tuttosport claims he is happy in the Eternal City and eager to make his loan permanent. Why not? He is welcome and wanted. Even at his best, Smalling endured ridicule and abuse from United supporters. After leaving under less than desirable circumstances, some footballers return to former clubs to show managers and fans they were wrong. Others move on, content and feeling they have nothing to prove. There’s no telling how Smalling’s state of mind unless the Reds ask.

This summer’s window is far shorter than the norm. Clubs will almost certainly be reluctant to let players leave without sufficient time to identify replacements. Yet, time isn’t a factor when a useful player is already on your books. While he was admittedly joking, Ole once suggested to reporters that Alexis Sanchez might return to the club to prove his doubters wrong. With Chris Smalling, he could be taken seriously.