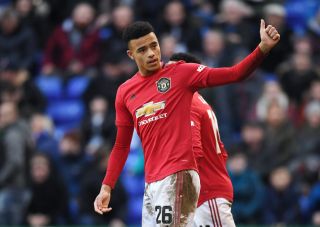 Mason Greenwood is the man of the moment at Manchester United. Many will claim and try to oppose this statement by replying that this status currently belongs to Bruno Fernandes. Neither statement is wrong as Bruno’s importance has been so obvious in these past months that it may feel absurd to state the contrary. However, my point remains at the fact of what Mason represents; not only as a Manchester United player, but also a young lad who has recently made the jump from the youth team to the first team and has been an added value in this attacking side Ole is trying to build.

Throughout the season, there have been significant issues regarding the team management mostly reflected in results and of course how would Ole help the youngsters in their transition to first team football. While many were impatient, this includes fans and players (Angel Gomes being the case), there is something we all should agree on: Mason Greenwood is a history of success, not just because of his immense talent and impressive work rate, but also a history of success that has to be attributed to Ole and his staff.

People may not fully agree with me on the statement, as Ole himself has been praising the kid and his finishing abilities, but having in your hands the career of a player like Mason Greenwood, the pressure is high since he may have ended up like some of the players all of us as United supporters thought that they would be, a history of success. Attitude is an important aspect as I have noticed in these young lads, but still the way the player was introduced in the first team, shows that Ole has a clear strategy how first team promotion will work in the upcoming years.

The work in the background is finally paying off and we are seeing the fruits as Mason Greenwood now has 16 goals (stats via WhoScored) in all competitions for the first team and I believe this won’t be the final number with United playing in three fronts until the end of this season. It’s exactly this work in the background that has helped his coaches and Ole to understand what kind of player Mason is and whether he could excel when playing for the first team. It hasn’t been always this easy to deal with the situation as Mason wasn’t getting sufficient minutes in the Premier League as he currently has only 1000 minutes in the competition scoring 9 goals. You can never please everyone, but the current man in form has waited for his time and it has been worth the wait.

The excitement rises when you see that Ole has been slowly preparing two other transitions, those of Teden Mengi and Ethan Laird; two highly rated defenders that could be of help considering the amount of games United has to play from now until the end of the season. Mengi made his debut for the Under 18’s while being an Under 16’s schoolboy with two appearances to his name in that season. During the 2018/19 season, Mengi was promoted to the Under 18’s making 21 appearances, assisting 4 goals. In the current season, the youngster was involved in both the Under 18’s and U23’s with his appearances not going unnoticed as he was in the bench when United faced Astana away in the Europa League. One of his most memorable performances for the fans was the FA Youth Cup game against Norwich where he scored a header from a corner kick and was also the best player for United with his much-needed interventions.

An injured Victor Lindelof made place for Eric Bailly who within minutes caused a penalty, meaning that the work on building a solid defence and a strong centre-back pairing is still unfinished. Currently, Axel Tuanzebe and Phil Jones are injured and based on what the manager said, Axel is unavailable until September leaving United short in choices at the heart of the defence. A question which may be easily asked is: ‘Should Teden Mengi be Ole’s choice to form the CB pairing with Maguire or should the manager stick with Bailly even though he has shown that he may not be stable?’

The manager will probably have his take on this one as well, but it expected that he won’t rush him and throw the player in the fire meaning that the player will have to be patient and at the same time keep working hard. The same argument remains on Ethan Laird with the player being unlucky with a series of injures that have kept him out for a while.

Ethan Laird is well-known among United fans as he has been showing how good he is at 18-years of age. The player made his first team debut against Astana, but hasn’t been lucky enough with injuries as he suffered a knee injury afterwards, meaning that this season he only registered 13 appearances with the Under 23’s in the 2019/20 season.

On the other hand, James Garner and Dylan Levitt are set to be sent on loan next season as they both need first team football to intensify their development. It will be a busy summer for our youngsters as many will also make their transition within the academy teams and they will be fighting for a place in the respective teams. It’s important to set an example of success so the standards are set, and they could look up to it.

While the COVID-19 pandemic has added uncertainties in the way things will be in the near future for football in general, the summer transfer market may probably set new rules regarding the signings any team will be making in the following years. This is where having a ‘healthy’ and stable youth system may be a blessing. Back in the day, Manchester United legendary manager Matt Busby proudly claimed in an annual general meeting: ‘There is no deep cause for worry – we have 200,000 pounds worth of skill and youth in our reserves,’ when the team was suffering of collective ageing. This situation may be different as Manchester United have been fielding a young XI this season, but the pandemic will most definitely change transfer plans and despite being in a strong place, target signings with a price tag of £100+ millions won’t be reachable, meaning, plans for signing Sancho and a prolific striker like Harry Kane in the same summer transfer market is in the limits of the impossible.

In complex situations, also unknown, every club not just United must turn their eyes on the academy and the top prospects they are raising. There’s an unwritten rule, the youngsters come to terms when they think of playing for the first team one day: they will either make it or break it, and in the recent years we have seen many youngsters come and go with just a few adapting themselves and settling in as first team regulars. It’s important the examples are set right and every player in the youth team will be aware that if you work hard and show the right attitude to play for Manchester United, you will have your chance.