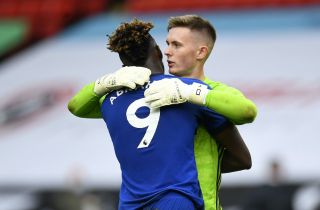 To date, Manchester United refuse to rely on the Court for Arbitration of Sport’s decision regarding Manchester City’s appeal of their UEFA European ban for financial irregularities, rolling to seven wins and three draws in their 10 Premier League matches since losing to Burnley in late January. On the other hand, they’re quite happy for the football gods to intervene.

Following that 0-2 defeat to the Clarets at Old Trafford on Matchday 24, United sat where they do now, fifth, in terms of position. Points-wise, it was a different story. They were six behind fourth-placed Chelsea and a seemingly insurmountable 14 adrift of Leicester City in third. Twenty-four from a possible 30 points reduced the Blues’ advantage to two and, pending the King Power outfit’s match today with all but doomed Bournemouth, the Foxes’ a meagre one. Moreover, the Reds’ 23-4 aggregate score against opponents in those ten matches reduced the gap in goal difference with Leicester to six.

Three daunting foes loom for the East Midlanders on the other side of what should be a comparatively easy game against Eddie Howe’s souring Cherries. Sheffield United, Tottenham and Manchester United themselves aren’t the sort of clubs against which Brendan Rodgers’ side can expect to run rampant.

Conversely, United can be optimistic when confronting Southampton, Crystal Palace and West Ham before wrapping up the campaign against Leicester. All three of those initial opponents reside in the league’s bottom half. While a four or five-star performance shouldn’t be anticipated against Roy Hodgson’s well-organised Palace, who’ve conceded only 43 goals this term, both the Saints [56] and Hammers’ [59] yield approaches 60 heading into Sunday’s fixtures. Thus, the goal gap can be narrowed and, with the head-to-head tilt on the cards, United can even pick themselves up and cross the line should they step on an unexpected banana peel along the way.

Such a slip, of course, risks insulting the gods who made yet another kind intervention on Saturday, putting a wholly unanticipated but welcome hex on Chelsea at Bramall Lane. When a 32-year-old journeyman’s first two Premier League goals come against you, thank you kindly David McGoldrick, even an inexperienced boss like Frank Lampard knows fate doesn’t hold his best interests at heart.

The Chelsea legend also knows, beyond any doubt at this point, that Jorginho is not the midfield anchor he needs. Forced to play the Brazilian-born Italian international for the first time since the restart with both N’Golo Kante and Billy Gilmour sidelined through injury, Lamps surely failed to see much to his liking. The previously potent attack [12G in five PL games since the restart] didn’t run through his No.5. Nor was the Scion of Sarri-ball an effective shield for the backline, with Kepa Arrizabalaga lucky to only pluck three balls from his goal.

Rather than a conduit between skill players and defenders, Jorginho amounted to a one-man wall dividing the two. The Blues pressured opponents more directly with Kante or Gilmour backing Ross Barkley and Mason Mount. The Frenchman and the young Scot pushed forward, blinders on, focussed intently on the opposing goal. Centre-halves supported them, forcing opponents to match Chelsea numbers from box to box, affording Christian Pulisic, Willian, and the fullbacks more space on the flanks.

With the Azzurri pulling strings, however, Chelsea played more laterally. All four defenders hung back to give Jorginho room to range from one side to the other. The Blades took advantage of the extra space everywhere on the pitch, enjoying spells of possession and hitting on the counter. Most importantly, however, Chris Wilder’s rearguard controlled the box in front of Dean Henderson while the Manchester United loanee made all the saves expected.

With command and composure, Sheffield’s current and possibly future No.1 maintained his season-long advantage in clean sheets, save percentage, punches, high claims and virtually every goal-keeping statistic over the man who stands between him and an Old Trafford career. The only number in which David de Gea dominates the 23-year-old Cumbrian is his astronomical wage.

By backstopping Sheffield United’s 3-0 victory over Chelsea at Bramall Lane, Henderson effectively opened the door for his parent club to enter the Champions League places with a victory over Southampton on Monday. In fact, another mistimed De Gea howler may be the greatest threat to United crossing the threshold.

The Saints are suspect at the back but their attack, with 19-goal man Danny Ings leading the line and the likes of Nathan Redmond, Stuart Armstrong and James Ward-Prowse supporting, can exert sufficient pressure on the Red Devils’ rearguard for the hosts to pine for the long-absent David de Hero rather than the more recently familiar De Heurelho in this affair.

United’s board recently revealed that their long-serving keeper, who will surpass Peter Schmeichel in Premier League appearances on Monday evening, was given a year to demonstrate he can shake the demons which have haunted him at crucial moments in this campaign and the last. Not so patient, Dean Henderson laid down the gauntlet with his performance against Chelsea. Even those Old Trafford faithful who hope to see the younger man guarding the Stretford End sooner rather than later, must hope that De Gea picks it up. The CAS may still rule against City but what United fan [or spurned football god, for that matter] is willing to tolerate an asterisk attached to the club’s invitation to next season’s Champions League?