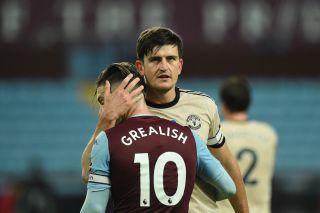 I’ll be honest enough to set out my stance on Mr. Maguire. When it came to the position of his transfer, I thought we got rinsed. Absolutely taken to the cleaners. Leicester City saw us coming and got what they were looking for. It was seen as another example of Ed Woodward’s ineptitude when it comes to negotiating deals. A price is quoted to you at the start of the summer window. You claim it is too high. A certain amount of haggling is done and you end up paying the exact same price quoted originally. Clap…clap. Particularly when he would have been 30 to 40 million prior to the 2018 World Cup. Other players were available in his position in Europe who were better established and would probably have cost less.

Still, I am a pragmatist. Once you are a United player, and willing to put in the effort for the shirt, I am prepared to give you leeway. The player does not set the fee being paid after all. And being English automatically adds another 20 or 30 million to your fee. Especially if he was able to have a calming effect on one of the biggest injury and mistake riddled back-lines in recent memory. His career trajectory had increased a lot since arriving at Hull from Sheffield United. Although he was unable to save them from relegation, he impressed enough to gain a move to Leicester. The 2016 champions had wobbled since then but stabilised during his spell at the club. Brendan Rodgers was able to unlock the attacking talents of the side in the knowledge that their backline took care of itself. The ability to score from set pieces was also an advantage.

He made a pretty assured debut in our opening day battering of Chelsea at home. But the side begun to slip back into familiar territory before too long. A combination of injuries and poor performances from led to an inability to string too many results together. When you are trying to build up a partnership at a new club, it does not really help. Having strikers who seemed unable to kill off sides, midfielders who constantly gave the ball away and a seemingly endless array of partners. We were capable of beating Leicester and drawing with Liverpool, but being hopeless with sides in the bottom half. Ambitions of silverware seemed further and further away from the top positions. Directionless, leaderless…. we seemed like a club going nowhere.

Then a modification took place in January which has turned the season on its head. The obvious moment came with the signing of Bruno Fernandes and Odion Ighalo. The latter was able to provide an outlet up front while Marcus Rashford was absent with a back injury. The former Sporting man was charged with providing the creative thrust which had been lacking for the majority of the season. It was also an off field switch which has helped affairs too. The departure of Ashley Young to Inter Milan left the role of club captain vacant. Existing options would have included the likes of David de Gea or Paul Pogba who wore the armband previously. Instead, he decided to hand the role over to the central defender.

And there has been noticeable improvement since then. Clean sheets which were a rarity, especially in the bigger games, suddenly became the norm. Four out of five in the weeks prior to the shutdown including a powerful header at Stamford Bridge. This was on the back of a piledriver in the cup tie at Tranmere. Defenders, like every player on the field, can be guilty of an error every now and then. Himself and De Gea were culpable of such a mistake in the first game back at Tottenham. He demonstrated his determination to get a result by marking Harry Kane out of the game. Even when the team are not at their best, he has shown he is adverse to losing. A crucial block at one end in the Norwich game and the winner at the very end proves that. To have one of the best records in terms of goals conceded (third best) proves the improvement in this area.

It is inevitable that comparisons are going to be made between himself and Virgil Van Dijk in terms of their price tag. Liverpool’s defence has improved remarkably in this regard in the time since he arrived. Utd are still a work in progress in that regard. He seems prepared criticism as he is to dish it out. Ole cast him daggers after being caught flat-footed against Bournemouth but he didn’t throw a strop as the indication is that he has high standards of himself and others. An aspect of him being a captain is being vocal when the occasion demands it. De Gea and Pogba were often lacking in that regards. Maguire was noticeably heard demanding that Shaw push on against Sheffield United.

Off the field, he has been very proactive as well. Just prior to the lockdown, he set out that squad members were going to be fined should they miss any forthcoming events organised by the team. This was to encourage bonding within the side. It was in response to a poorly attended dinner set up by Juan Mata. He also stated that the first team squad were due to take a pay cut in order to protect jobs of non-playing staff during the impasse. We are lucky to have a number of strong personalities emerge in different areas of the pitch which makes the job easier. Fernandes, Matic, Wan-Bissaka, and McTominay all possess that ability to control a game or make a match winning contribution. For now, the job remains with Maguire and if we can continue winning to the end of the season he will be, ahem, a head of the pack. Sorry.