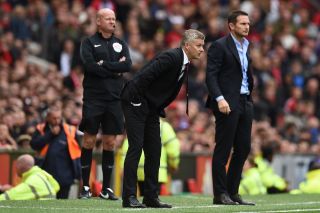 Manchester United have reportedly been a source for enquiry from Frank Lampard’s Chelsea as they look to bolster their defensive options. According to reports, Lampard is interested in signing on-loan United goalkeeper Dean Henderson.

Henderson, 23, has spent the season on loan at Premier League surprise outfit Sheffield United. The young keeper has endured an impressive spell under manager of the season contender Chris Wilder after starting 33 league games and notching 13 clean sheets as per SofaScore.

With United number-one David de Gea coming under intense criticism recently due to some sub-par performances and costly errors, Henderson has seen his name thrown into the debate as to who should start next season in between the Old Trafford sticks.

However, according to recent reports from The Express, Chelsea have become interested in securing Henderson’s services.

Chelsea number-one and record goalkeeping signing Kepa Arrizabalaga, just like to De Gea, has also come under criticism this season after a tough debuting campaign in England’s top-flight.

It is now believed that Chelsea boss Lampard has lost faith in the Spanish keeper and is seeking an alternative in the form of the on-loan Henderson.