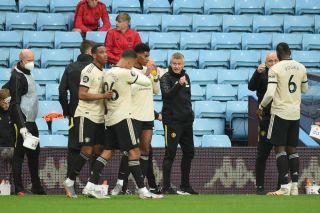 Ole Gunnar Solskjaer is relaxed about Manchester United’s need to qualify for the Champions League this season.

United will find out if finishing in fifth position is enough to qualify for Europe’s elite competition before their fixture at home to Southampton on Monday evening.

Manchester City are set to find out if they have been successful in their appeal to the Court of Arbitration of Sport over their two year ban in European competition.

If City are completely exonerated from their two-year ban, United will need to leapfrog Chelsea or Leicester City to ensure a Champions League spot next season.

Solskjaer discussed the importance of playing Champions League football next season, suggesting some decisions will be made easier if his side manage to qualify.

“I don’t think it’s like dramatic decisions, the word you said there, I don’t think the club would panic or go crazy with plans that we’ve already talked about for years to come,” Solskjaer said in Saturday morning’s press conference, as quoted by the Manchester Evening News.

“You do have to have a long-term plan but short-term some decisions will be easier to make if you get the Champions League.”

The short-term decisions that are dependent on a Champions League finish are likely to include United’s ability to attract their top summer transfer targets.

According to the Evening Standard, Borussia Dortmund are preparing for the prospect of losing Jadon Sancho to United this summer.

The Standard reports that Sancho remains United’s priority target and a move to Old Trafford this summer remains a possibility regardless of the financial implications of the coronavirus pandemic.

But perhaps Sancho would think twice about his decision if he was not guaranteed the chance to play at the highest level next season.

Anyhow, United have a fantastic opportunity to claim a top four finish by winning their last four Premier League games.

The Reds sit just one point behind stuttering Leicester and have the Foxes to play on the final day of the season.