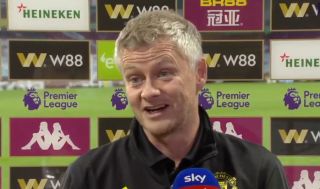 It’s great when your team breaks records for the right reasons but Manchester United still have some way to go before fans can celebrate.

You can see from watching the lads every week that things are starting to change for the better. We have witnessed positive results and progressive football in recent months and there’s a belief surrounding manager Ole Gunnar Solskjaer.

They broke a Premier League record on Thursday night by winning their fourth consecutive game in the league by three or more goals.

Solskjaer, who deserves a lot of credit for his work with the first-team to date, gave a response we think fellow Reds will enjoy when Geoff Shreeves raised the remarkable record.

Asked about United’s brilliant record in front of goal, Solskjaer argued that the team should have scored more goals in all of those matches, against Sheffield United, Brighton, Bournemouth and Aston Villa.

Watch below courtesy of Sky Sports:

🗣"We should have scored more in all of them

This is the sort of message you want to hear coming from your manager because United still have lots of work to do before they’re good enough to win the Premier League. We can celebrate again when that happens and the trophy is back where it belongs.

Roll on Monday night (8pm) for our next game against Southampton at Old Trafford.