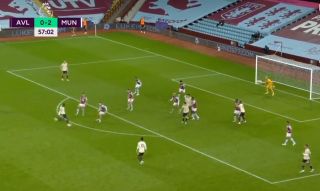 Paul Pogba calmly placed the ball into the bottom corner from outside the box.

Manchester United appeared to struggle in the first-half despite going in at the break two goals ahead.

But they’ve increased their lead shortly after the break with Paul Pogba scoring from outside the box, with midfielder partner Bruno Fernandes picking up an assist to go with his opening goal from the penalty spot.

With two unbelievably creative players in the middle of the park teams are finding it a lot more difficult to play against United. Villa join a list of other Premier League clubs who have failed to contain the pair.

Villa look beaten and this could get ugly for the relegation strugglers.

This was Pogba’s first goal from open play since February 2019.