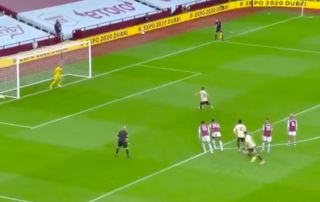 Bruno Fernandes has given Manchester United an undeserved lead against Aston Villa at Villa Park.

The Reds have been passive in the opening exchanges, allowing the home side too much time on the ball, and failing to allow Fernandes and Paul Pogba to influence the play.

But United were given the chance to take the lead on 27 minutes after Ezri Konsa was deemed to have fouled Fernandes in the box.

The decision from Jon Moss was certainly contentious, and prompted VAR to check numerous angles, but there was no reversal.

Fernandes cooly slotted home past Pepe Reina to score his fifth goal in five league games side the restart.

Should Manchester United have been awarded the penalty though?