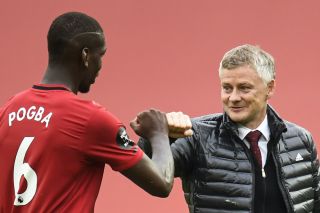 Paul Pogba doesn’t give many interviews but when he does we usually tend to wish he’d show more devotion to Manchester United.

Prior to the coronavirus pandemic many fans were accepting that these were Pogba’s final months at the club. Through some fault of his own, but most notably Mino Raiola, his agent who publicly slammed manager Ole Gunnar Solskjaer earlier this summer.

In a rare interview, Pogba spoke to United Review about his return, the team’s recent form and how they can get back to winning trophies.

“To become a top, top team we just need to forget about the last game.

“We do it, we play well, we do great but then we forget about it and we think about the next one. Take last week, we don’t think about what happened, we are focused on going again. We have to always keep having the goal to improve ourselves and never get satisfied with what we did.

“For example, Martial scored three goals, his first hat-trick, then he goes again, you have to carry on… he wants to take another ball home, you know! [Smiles] You have to have this mentality, score a goal and do it again and again… Bruno, Rashy, Mason… hey if you got two goals, great, but go for three, why not. You have to keep this mentality, keep a clean sheet too… we want to keep working on this and we have the mentality to do it.

“That’s also the mentality of this club, it’s always been like that. We’re never satisfied with one trophy or one game we win or two games or 10 games, you want more, you always want more. That’s what makes Manchester United the biggest club, for me, in England.”

It good to see Pogba’s focus is on United again.

I have no doubts in my mind that he wanted to leave last summer and he’d probably jump at the opportunity if Real Madrid came in for him at the end of the month, but these are better signs that he wants to be United.

A happy Pogba could make a big difference and it looks like everyone at United is happy at the moment. Long may that continue, hopefully with a win over Aston Villa tonight!