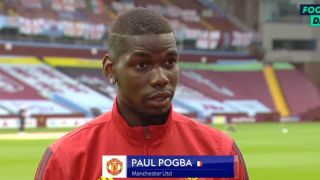 Earlier today we ran a report citing Julien Laurens, a reliable French journalist who claims Paul Pogba is happy at Manchester United and all parties (club and player’s agent Mino Raiola) are optimistic about a new contact terms being agreed.

Pogba’s contract expires in 12 months but the Red Devils have an option to extend that by a further season.

However, judging by Pogba’s pre-match interview with Sky Sports he certainly looks happy and is talking like a player focused on United.

United are looking much stronger with Bruno Fernandes, Nemanja Matic and Pogba in midfield and we see the same line-up tonight against Aston Villa.

Check out Pogba’s pre-match interview below (via Sky Sports), where he compliments his teammates on playing great football since the Premier League resumed:

🗣"We have been playing great football"

Paul Pogba on Manchester United since the restart 🔥

He’s not wrong but we need to continue our unbeaten run tonight with a win over Villa!