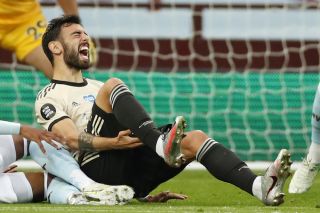 Unfortunately it’s not significant enough to see us take the title from Liverpool, but it’s a noteworthy statistic at the very least.

In the 27th minute of the game on Thursday night Jon Moss adjudged that Bruno Fernandes had been fouled by Aston Villa full-back Ezri Konsa. The call was looked at again but VAR didn’t reserve the decision.

We won’t lose any sleep over it being a soft penalty and Villa are currently three goals beside, so they can’t claim it made any real difference to the outcome of the match.

The penalty put away by Fernandes was incredibly United’s 13th in the league this season — no team has ever been awarded that many penalty in a Premier League campaign before.

That is according to Opta author Duncan Alexander:

United are close to keep their run of 16 games unbeaten going with the clock running down at Villa Park.

Even though Fernandes stood up and scored his penalty, United have a number of players in the team capable of scoring spot kicks, including Marcus Rashford and Paul Pogba.

Mason Greenwood used to score them in the youth teams as well as free-kicks.