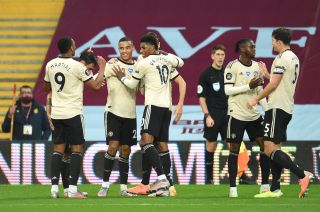 Here are our player ratings from Manchester United’s emphatic victory over Aston Villa at Villa Park:

Wasn’t tested on his 399th United appearance despite Villa’s early pressure. A comfortable evening for the Spaniard. 6

Unusually sloppy in possession at times but barely put a foot wrong defensively. Shaw has started every game in United’s 17-game unbeaten run and has become part of the furniture in Solskjaer’s winning formula. 6

Looked shaky in the first-half but justified his selection again with another clean sheet.  Progressive on the ball in what soon became a procession in the second-half. 6

Marshalled the defence well after a jittery performance against Bournemouth on Saturday. Confident in bringing the ball out from the back to initiate United attacks. 7

Caught out of position as Villa put United under pressure early on. Should have scored his first goal in his United career but he somehow headed wide in the second-half before being replaced by Brandon Williams. 5

Matic looked cumbersome as United struggled to assert their dominance in the opening exchanges but controlled things as soon as the game became a formality at 2-0. 6

Unassumingly quality again in possession and visibly enjoying his football in the deep-lying playmaker role. His precise finish to make it 3-0 was another reminder of his attacking prowess. 7

Struggled to have an influence in the opening exchanges but his emphatic penalty to give United the lead completely changed the  dynamic. Wasn’t at his outstanding best but produced some glorious touches. 7

Came into the game after a fairly quiet first-half. A constant menace to the Villa defence on the left-flank, linking up well with Martial in the second-half. Could have made it four in the closing stages. 6

Fantastic work in the build up to Greenwood’s second goal and a constant threat to the Villa defence. Unlucky to rattle the crossbar as United threatened to run riot in the second-half. Frustrated to be hauled off with 15 minutes remaining.  7

United’s brightest player in the first-half and his spectacular strike on the stroke of half-time ended the game as a contest. Was hooked by Solskjaer midway through the second half ahead of Monday’s game against Southampton. 9

Controlled the game in what was a formality upon his arrival from the bench. 5

Came on midway through the second-half at right-back to give Aaron Wan-Bissaka a welcome rest. 6

Added fresh impetus from the bench. 5

Had little impact in the short space of time he was on. 5

Brought a new energy to United’s attack, without the cutting edge in the final-third. 5