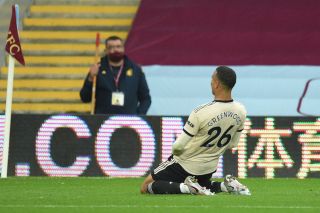 Someone really should tell Mason Greenwood that at 18-years old you’re not meant to be banging in 16 goals in all competitions in your breakthrough season.

The English youngster is undoubtedly one of the most exciting prospects to come out the United academy in years with legends such as Patrice Evra comparing him to the likes of United favourite Robin Van Persie.

Greenwood has stamped his authority on United’s crucial tie against strugglers Aston Villa as the Reds pursue a place in the top-four with a cracker of a strike just outside of the area.

The strike which sees the Reds go 2-0 up came just shy of the half-time break and makes manager Ole Gunnar Solskjaer’s team talk a little easier after seeing his side seemingly struggle to break down Villa.

Arguably football’s hottest prospect has once again sent United fans into dreamland and now those same fans have taken to their social media to express their delight that he’s one of their own.

This boy is special, no doubt about that.

Greenwood is the greatest at 18.

Wat I see in his eyes 👀 GREENWOOD pic.twitter.com/givCDeMbn0

I would happily bet my whole house that Greenwood would score from that position pic.twitter.com/bygkvFtkXB

Greenwood is just scoring for fun 😂😂

Greenwood is something else 😳 #AVLMUN

It’s terrifying how a striker that young can be that good 🤩 Mason Greenwood, take a bow