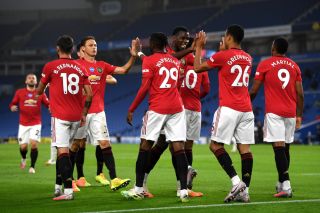 United can extend their unbeaten run to 17 games this evening to maintain pressure on Leicester City and Chelsea in the race for a top four finish.

Solskjaer’s men have the opportunity to create Premier League history this evening by becoming the first side in the division to win four consecutive games by a 3+ goal margin.

But United’s primary focus will be on securing three points against a relegation-battling Villa side at Villa Park.

Solskjaer has named an unchanged starting eleven for the fourth consecutive league fixture.

Victor Lindelof was a doubt this evening but starts alongside captain Harry Maguire in defence after recovering from a back problem that forced him off at half-time against Bournemouth.

United have found their best midfield combination with Nemanja Matic screening the back four, which allows freedom for deep-lying playmaker Paul Pogba and the more advanced Bruno Fernandes to express themselves. The trio start together again this evening.

Meanwhile, the dynamic frontline of Anthony Martial, Marcus Rashford and Mason Greenwood all retain their places in attack.

Greenwood is quickly becoming an undroppable under Solskjaer and will hope to continue his impressive goalscoring form since the restart.