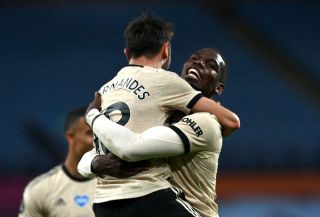 What would you buy with £47m? A few houses? A couple of cars? Invest in a business? – Well, Manchester United’s executive vice-chairman Ed Woodward opted to spend £47m on a Portuguese midfielder (via BBC Sport) and what a decision that has turned out to be.

Since his arrival at United in January earlier this year, Fernandes has exploded onto the scene, lighting up the English Premier League along the way.

The 25-year old has arguably been the Red’s biggest influence as they have transformed into an attacking force reminiscent of the United of old once again.

The Portuguese midfielder dubbed a ‘Magnifico’ by the United faithful has been a revelation during times of otherwise uncertainty.

His constant work-rate and desire to drive the Reds forward has been a major contributor to his new-found fan favourite status.

Not only is the exciting midfielder setting the league alight, he’s also setting records in the process.

The latest insane record Fernandes has smashed sees him become the first player in Premier League history to return 13 goal contributions in their first 10 games. A truly magnifico achievement.

No player in Premier League history has a better G+A return in their first 10 games than Bruno Fernandes (13).