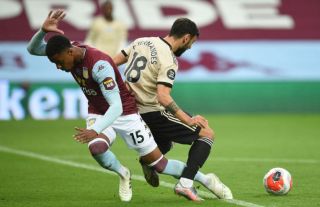 I can see why Aston Villa aren’t happy at half-time.

They’re losing 2-0 thanks to goals by Bruno Fernandes and Mason Greenwood, but Manchester United haven’t been at their best.

To make matters worse the penalty which led to Fernandes’ opening goal was controversial to say the least.

Jon Moss gave it but I don’t think you’ll find any Villa fan agreeing with the call. We thought it was a penalty until replays showed Fernandes turn before crashing into a Villa defender, not the other way around.

We’ll take it nonetheless but Villa took to Twitter with a picture of the incident, as seen below: