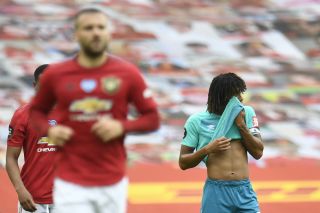 Ole Gunnar Solskjaer dismissed reports that he dropped a transfer hint to Bournemouth defender Nathan Ake after Saturday’s 5-2 win over the Cherries.

The Manchester United manager was caught on camera after the full-time whistle exchanging words with the former Chelsea defender. Some fans picked up on what was said, claiming Solskjaer told Ake that he was looking for a left-footed centre-back.

Solskjaer was asked about his chat with Ake before giving a blunt response during this morning’s press conference.

“I’ve got seven centre-backs, I don’t know where that’s come from,” he said as quoted by the Manchester Evening News. “We’re fine.”

It’s worth noting that Solskjaer was never going to publicly come out and admit what he supposedly said to Ake, and the club may even need to rethink their stance if what was reported is a load of baloney…

Solskjaers plays down Ake talk by reiterating he’s already got seven centre-backs. The issue is at we are only confident that one of them is a starter. Most of them are not good enough for United and they’re already having to call in Teden Mengi to make up the first-team numbers.

Ake is very good defender it it may be worth tracking him over the coming weeks if Bournemouth go down to the Championship.

He could compliment Harry Maguire at the back.