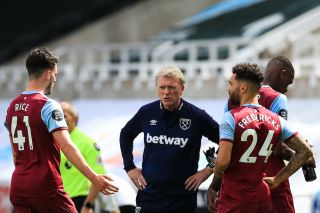 According to a report from the Independent, West Ham boss David Moyes is interested in signing Manchester United duo Phil Jones and Jesse Lingard.

I think the former Manchester United manager would be doing his ex-employers a massive favour.

It is claimed that Ole Gunnar Solskjaer is prepared to allow Jones and Lingard to leave Old Trafford at the end of the season. There won’t be any tears shed about because both players need to be moved on.

The biggest line from Miguel Delaney’s article is “if West Ham United stay in the Premier League” because they clearly won’t be able to pay their wages, if relegated to the Championship.

As things stand, the Hammers are 16th in the Premier League, four points from the drop zone, and they don’t have the worst of run-ins.

Although they face the Mighty Reds away from home on Wednesday, July 22, West Ham still have to play relegation contenders Norwich City, Watford and Aston Villa. They stand a very good chance at staying up.

David Moyes needs to bolster his defensive ranks this summer and I don’t think Jones would be the worst signing, and it’s a team you could see Lingard playing regular football in.

Jones, a 27-capped England international, joined United from Blackburn Rovers in the summer of 2011 for around £17m (via BBC Sport) but hasn’t met the expectations set by the man who signed him, Sir Alex Ferguson.

Then there’s academy graduate, Lingard, who I think can reflect positively about his contributions in the first-team. The FA Cup final goal against Crystal Palace being a high point — but he just doesn’t cut the mustard and we’ve seen a huge improvement on the pitch since replacing Lingard and Juan Mata cameos with Bruno Fernandes.

Lingard at his best is no more than a squad player. Jones, on the other hand, doesn’t even make that grade.