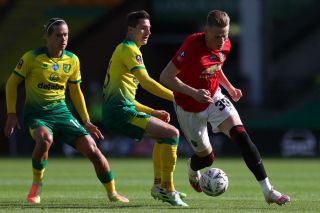 Nemanja Matic signed a new deal at Manchester United this week and Ole Gunnar Solskjaer believes he will have a good influence on Scott McTominay.

In an announcement earlier this week Manchester United confirmed that Nemanja Matic has put pen to paper signing a deal that will keep him at Old Trafford until 2023. The update brought happiness to fans with the Serb playing a key role in United’s terrific form since the turn of the year.

Manager Ole Gunnar Solskjaer addressed the media for the first time since Matic and the club agreed on a contract extension, so he would have had an answer prepared in advance.

“Nemanja’s been on record saying how much he can see himself in Scott. They can bounce off each other, never easy. So many times I’ve said to Nemanja I’m playing Scott today and he accepts it and [the] other way around, they accept it, they can play together and I’m sure Scotty will learn from Nemanja, attributes and way he’s gone about his job has been great.”

I previously made this point about McTominay on the Strettycast – and think over the next two years he will be ready to be United’s main holding midfielder. He’s a versatile player who still has lots to learn.

Moreover, it’s good for a team to have competition for players with younger players constantly improving. That’s why I don’t think Solskjaer would go crazy in the transfer market, not that he would be allow to under the Glazer family’s ownership.

This season McTominay has become one of the greatest influences on the pitch at United. The arrival of Bruno Fernandes has made things very exciting for the future.