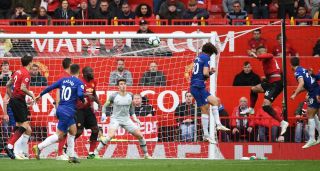 Manchester United are set to back manager Ole Gunnar Solskjaer during a period of rebuilding as the club looks set to offload Marcos Rojo this summer.

Rojo, 30, signed for the Reds in the summer of 2014 from Portuguese side Sporting Lisbon for a reported fee of £18m, according to Transfermarkt.

The flamboyant defender has gone on to make 122 appearances for United, scoring twice along the way.

Rojo has recently found himself out of favour at Old Trafford and consequently has spent the last six-months on loan in his native Argentina at club Estudiantes, however, it does appear now that the South American’s time at United is coming to an end.

Speaking exclusively with Jonathan Barnett who represents Rojo, Stretty News asked if Solskjaer’s recent comments to Bournemouth’s Nathan Ake were a sign Rojo could depart United in the summer.

Solskjaer appeared to say ‘keep going, we’re looking for a left-footed centre-back’ to the Bournemouth defender after United’s 5-2 win last weekend and fans have been quick to suspect Solskjaer doesn’t see Rojo as part of his plans.

Barnett was inclined to agree, he said: “I couldn’t comment on what Solskjaer thinks but I think it’s obvious, I think with Rojo, probably [a move] is more than likely somewhere else.”

When asked if a potential move for his client could be a permanent one back in Argentina, Barnett said: “I don’t know yet. I’m not sure.”