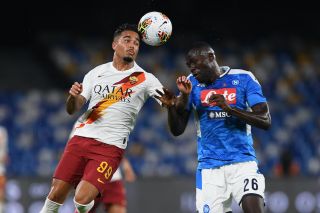 Manchester United are believed to be in the market for a centre-back this summer and have been heavily linked with Napoli’s Kalidou Koulibaly.

Koulibaly, 29, has started 18 Serie A games for his side thus far, this season contributing to four clean sheets.

The Senegalese powerhouse is rumoured to be a United target (via The Sun) due to his experience and physical presence at the heart of one of Europe’s best side.

It is worth remembering though, despite ongoing suggestions that United have a defensive crisis on their hands, the Reds have conceded just six goals in their last 16 games.

The requirement for a new centre-back may not be as much of a priority as originally thought.

Defensive duo Chris Smalling and Marcos Rojo are set to depart this summer, which could mean United may be considering adding some depth to their back-line.

However, despite multiple reports, a name they are not interested is Napoli’s Koulibaly.

Stretty News have obtained information from a source close to the player who has confirmed that the Reds have no interest in Koulibaly and that would only change depending on the fee parent club Napoli demand.

No United approach has been made or is expected to be made for Koulibaly.