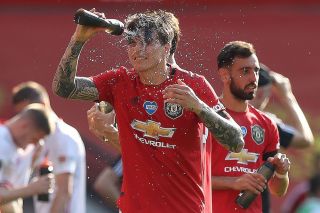 Ole Gunnar Solskjaer has provided an injury update on Victor Lindelof ahead of Thursday’s game against Aston Villa.

The centre-back was withdrawn at half-time in United’s 5-2 win over Bournemouth on Saturday with a back problem. Everyone suddenly wanted to know what that would mean for the upcoming game against Aston Villa.

When asked if there was concrete news on Lindelof, Solskjaer told the official Manchester United website: “Not yet, no. It’s not too bad. He’ll play soon.

“I’m not sure if he’ll manage the Villa game, but he might do.”

Solskjaer may add to this when he does his pre-match press conference later this morning.

While we’ll have updates on that in duo course, what options does Solskjaer have available to him if Lindelof doesn’t make the trip to Villa Park?

Eric Bailly would be most likely to start either way, but Phil Jones and Axel Tuanzebe are currently out nursing injuries but Gary Neville recently called for Scott McTominay to be trialled at centre-back.

There’s always room to think outside the box.

Lindelof has yet to convince me he should be Harry Maguire’s permanent partner and I don’t get the impression Solskjaer trusts Bailly quite so much.

Maybe a left-footed defender is on the target list this summer.