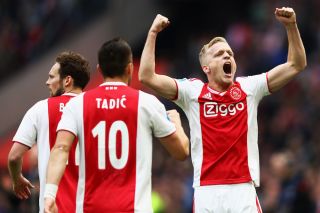 Manchester United transfer target Donny van de Beek has been advised to move to either Bayern Munich or Borussia Dortmund this summer.

Van De Beek is widely expected to leave Ajax this summer, and is likely to have plenty of potential suitors after establishing himself as one of the most talented young midfielders across Europe.

The 23-year-old was a key figure in Ajax’s amazing run to the Champions League semi-finals last season, and helped lead his side to the top of the Eredivisie this term before the season was curtailed early due to the coronavirus pandemic.

As reported by the Manchester Evening News, Van de Beek is on the list of midfield transfer targets at United this summer.

But the Dutchman’s compatriot Van Der Vaart thinks the Bundesliga is his ideal transfer destination.

“In my opinion, Bayern Munich and Borussia Dortmund would be great clubs for him,” he told Dutch newspaper Trouw.

“If Real knocks, what should you wait for? If the club really wants you, it will get you too.

“Many people advise him to stay with Ajax for another year and play a good European Championship with the national team. None of them understands how difficult it is to turn down a club like Real Madrid.

“The only thing that counts in Spain is winning a title. That brings a lot of pressure and you also need a bit of luck.

“We also thought that Frenkie de Jong was perfect for Barcelona, and at the moment it doesn’t look that way anymore.”

The brilliance of Paul Pogba since the Premier League restart alongside Bruno Fernandes has led many to question the urgency of needing a player of Van de Beek’s skillset.

ESPN report that Ole Gunnar Solskjaer may well use the funds earmarked for the likes of Van de Beek and Jack Grealish for a centre-back to play alongside Harry Maguire.

But while United’s midfield has impressed since the restart, the lack of strength in depth is apparent when Solskjaer’s key men are rested.

United are aiming to build a squad capable of eventually challenging for the Premier League title and the dynamic, versatile Van de Beek would be a fantastic acquisition if he could be persuaded to Old Trafford.

READ MORE: Manchester United have two transfer targets to watch out for against Aston Villa