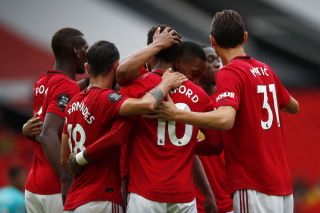 The outcome of Thursday’s game holds huge importance at both ends of the Premier League table, with United hoping to maintain pressure on their top four rivals and Villa desperate to get their first victory since the restart to boost their survival hopes.

Free-scoring United are flying under Ole Gunnar Solskjaer and will be confident about making it four consecutive league wins against the relegation-battlers.

But Villa did show some resilience against Liverpool at Anfield on their last outing before eventually succumbing to a 2-0 defeat.

Smith is under no illusions over United’s attacking threat, and named the instrumental Fernandes as the one to watch out for on Thursday.

“It’s a tough task but no tougher than going to Anfield and playing against Mo Salah, Sadio Mane and Roberto Firmino – three of the best strikers and now champions,” Smith said when asked about facing United’s attack, as quoted by the Manchester Evening News.

“Now we’ve got to do the same against a team who are full of confidence and the main man to watch is Fernandes who’s been outstanding for them.”

“Hopefully this will be the first [league win since 1995],

“United are a very good team, we know that. They’ve improved, and as I said Fernandes is playing very well.

Fernandes has been magnificent since the restart, earning a  nomination for the Premier League player of the month award for June alongside teammate Anthony Martial.

The Portuguese playmaker has scored four goals and laid on two assists in the last four league games since last month’s return.

Fernandes is likely to start as part of the same attacking quintet including Paul Pogba, Mason Greenwood, Anthony Martial and Marcus Rashford that have scored 11 times in the last three league outings.

But while United look so ominous in attack, the defensive efforts in the 5-2 victory over Bournemouth left plenty to be desired and Smith has identified the possible vulnerability at the back.

“They’ve got pace and power up front as well but they conceded a couple of goals against Bournemouth at the weekend and Bournemouth took the lead.

“There’s a lot of heart we can take certainly from our performance against Liverpool and we’re going to need that sort of performance again, but we need to be better in the final third and take our chances when they come.”