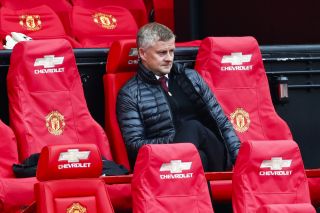 Ole Gunnar Solskjaer has confirmed that Victor Lindelof is an injury doubt for Manchester United’s game away to Aston Villa on Thursday evening.

Lindelof was taken off at half-time in the 5-2 rout over Bournemouth at Old Trafford with a back problem, the severity of which has since been unknown.

United boss Solskjaer was asked by club media on Tuesday morning if there was any concrete update on the Swedish defender’s fitness.

“Not yet, no. It’s not too bad, he’ll play soon,” Solskjaer told the club’s official website.

“I’m not sure if he’ll manage the Villa game, but he might do.”

It’s encouraging that Solskjaer doesn’t seem concerned by the fitness of Lindelof, who has been a mainstay in a defence that has performed so impressively during the 16-game unbeaten run.

But if he does indeed miss the Aston Villa fixture, Solskjaer will be forced to make a change to the starting line-up that has earned emphatic victories in their last three league outings.

The Norwegian’s options are limited if Lindelof is ruled out of Thursday’s game at Villa Park.

Eric Bailly, Lindelof’s replacement against Bournemouth, conceded a penalty during an erratic second-half showing on Saturday but the Ivorian will likely play alongside captain Harry Maguire if the Swede is missing.

If Lindelof is not risked, Solskjaer could have the opportunity to promote U18 captain Teden Mengi to the matchday squad.

We are likely to find out more on Lindelof’s injury in Wednesday morning’s press conference and we will provide all the important updates here on Stretty News.

Victor Lindelof is a doubt for #MUFC’s trip to #AVFC due to a back problem. Asked if there was concrete news on the defender, Ole Gunnar Solskjaer told club media: “Not yet, no. It’s not too bad. He’ll play soon. I’m not sure if he’ll manage the Villa game, but he might do”