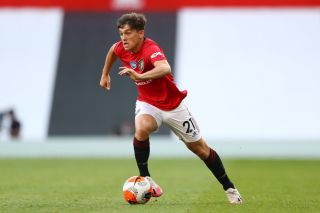 Manchester United winger Daniel James looks set to be a constant and important member of the club’s first team amid speculation surrounding a possible loan move next season.

James’ agent Jonathan Barnett from Stellar Group spoke exclusively to Stretty News and expressed his view that he sees the Welsh winger’s immediate future very much at United.

The 22-year old winger has come under pockets of criticism this season after a drop-off in form.

James, who endured such an impressive start to life in Manchester after scoring on his debut against fellow top-four hopefuls Chelsea has failed to net in his last 27 Premier League appearances.

Of course, it goes without saying that a fluctuation in form is to be expected with such a young and inexperienced player but Barnett tips James to recapture his impressive early United form.

Highlighting just how well United’s current front three of Marcus Rashford, Anthony Martial and Mason Greenwood are performing at the moment with 55-goals between them, we asked Barnett if he believes James has the mentality required to fight for his place: “I think if you don’t have that character you shouldn’t go to Man United,” Barnett said. “We as a company have a responsibility to help them and point these things out and in Dan’s case it was obvious he has that character.

“I think if you asked generally the people at Manchester United and I am presuming, I haven’t spoken to them but they would be very pleased with his progress.

“It’s very normal with a young player that he has a little dip in his form at the same time that the other guys have done extremely well, so he’ll have to wait his chance and when he gets it, he’ll take it.”

When asked if there is any weight to The Sun’s recent reports that James could be subject to a loan move next season, Barnett said: “No. He’s a major part of Man United’s team. I see him playing for Man United.”

United fans will certainly be looking forward to seeing James rival the current front three for a starting place, with such pace and raw exciting directness James ticks all the boxes required to get the Stretford End off their feet.