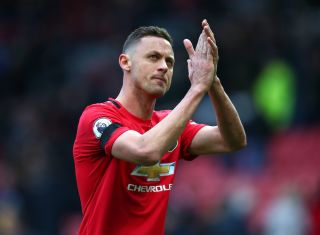 Manchester United confirmed earlier today that Serbian defensive midfielder Nemanja Matic has agreed to extend his contract with the club until 2023.

United announced the news that Matic has successfully signed an extension on their official website ManUtd.com.

Matic, 31, has endured a solid season overall with his reliable form the driving force behind Ole Gunnar Solskjaer opting to start him in 23 games in all competitions.

In light of what was arguably the holding midfielder’s best game against Brighton and Hove Albion the Serb has been rewarded with an extension which will carry him beyond his 34th birthday.

It is not yet understood the exact terms of Matic’s new deal with a one-year extension being debated and speculation of a coaching role after his playing days also surrounds the midfielder.

Matic is clearly a key member of Solskjaer’s plans with the Norwegian appearing to prefer him operating at the base of United’s midfield over Scott McTominay and Fred in recent games.

Fans have since taken to their social media to react to the news that their side’s most experienced player has opted to see out his top-flight career at United.

Got a lot of time for Nemanja Matic rocking up to his contract renewal in a three piece suit with a top pocket and a gold pen like some sort of high brow Bond villain. pic.twitter.com/RDCYVVaTK6

Matic signing a new contract is excellent excellent news. Why? Because he will do the job when the young dm we’ll inevitably need to buy is out injured or out of form. Plus as we’ve said so many times buying young players without having veterans to nurture them means nothing

Deserved. I’ve been his biggest critic but he’s been a revelation in the second half of the season and key to United’s turnaround. He’s playing like prime Matic. That being said I think a 3 year contract is way too long for a 32 year old when we should be building for the future. https://t.co/9CUtktjIgX

Manchester United gave Nemanja Matic the new contract because of his experience.. The team has a bulk of young players.. The younger boys can learn from him. #Egesports

Nemanja Matic fully deserves his new contract 👏. Something like back to his best. Playing with better players definitely helps that.