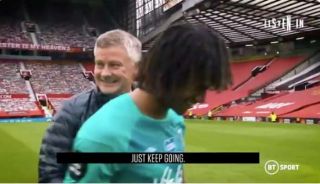 Did Ole Gunnar Solskjaer forget about the mics when he approached Bournemouth defender Nathan Ake at the weekend?

Manchester United beat Bournemouth 5-2 at Old Trafford on Saturday and neither side could be happy with their defensive performances.

That didn’t stop Solskjaer dropping a transfer hint with one of Bournemouth’s centre-backs at full-time.

Ake is a quality defender who left Chelsea for regular first-team football in 2017 and a season-long loan spell at Dean Court, and it wouldn’t surprise us if a top team signed him this summer with Bournemouth losing their fight for Premier League survival.

I guarantee a lot of Chelsea fans wish they still had the Netherlands defender.

However, BT Sport posted a Twitter video on Sunday morning which showed the players and managers interacting after the match.

Solskjaer approached  Ake and was quoted by BT Sport as saying: “Good luck. You need a bit of luck from your centre-backs. Just keep going.”

But United fans on social media have a different opinion about what Solskjaer really said to the Dutch international.

They reckon the United boss said: “We need a left-footed centre-back, keep going.”

Listen to the clip below:

Ole 100% said to Nathan Ake at full-time on Saturday that “we need a left-footed centre-back so keep going.” Seems to me like he might be one of the options.

Solskjær giving Nathan Ake a push towards Old Trafford. Can't believe they caught him on BT saying one thing and subtitled it wrong to what he actually said 😂

What do you think?