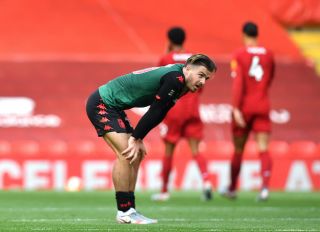 Former Aston Villa striker Darren Bent feels any proposed move for Jack Grealish from his old side to Manchester United would be a bad move as he doesn’t think the English midfielder stands a chance of breaking into Ole Gunnar Solskjaer’s starting line-up.

Grealish, 24, has been the subject of much speculation in light of his impressive break-out Premier League season after helping guide his boyhood club Villa back to England’s top-flight.

The young English midfielder has scored seven goals and assisted a further six in his 31 starts for Villa thus far, this season.

Amid links to Solskjaer’s United, Grealish’s future has been cast further into doubt as his side look doomed for the drop.

In stark contrast to Villa’s abject form, Ole’s Reds are flying in the league since star-man Bruno Fernandes’ arrival. United have taken 14-points from a possible 18-points since the Portuguese midfielder’s switch to Manchester.

The stunning form of United’s young front-three cannot be underestimated either with Marcus Rashford and Anthony Martial both netting 20-goals each in all competitions shortly followed by Mason Greenwood who is on 15.

It is the stunning form of United’s attacking line which has led ex-Villa forward Darrent Bent to believe that United should not sign Grealish.

Bent, speaking on TalkSport, as quoted by Birmingham Live, said: “Just because there’s no way on the planet United could have them three in the middle of the park Fernandes, Pogba and Grealish because defensively they would get run all over.

“I just think, you look at their front three Martial, Rashford and Greenwood, he is not going to get in up there.

“I am not quite sure United need him in midfield if I am honest – he has got all the ability but he is not going to take Fernandes’ spot or Pogba’s and you are not going to put him in there as well – Pogba doesn’t really want to play holding midfield.”