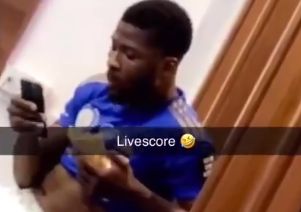 Manchester United are embroiled in one of the closest races for the top-four the Premier League has ever seen. The Reds are pushing current third placed team Leicester City and fourth placed side Chelsea all the way in what appears to be a three horse race for just two available spots.

United, Chelsea and Leicester City are all separated by three-points with just five league games to go in what is shaping up to be a nerve-racking final day finale.

The Premier League’s final day on July 26 will see four of the three sides racing to finish inside the league’s top-four face-off against one another in what could be one of the most exciting conclusions in recent years.

Rodger’s Leicester City side are clearly feeling the pressure as they try to hang onto their third place amid some patchy form as some of their key stars have been spotted tracking United’s results in hope the Reds slip-up.

Read more: Paul Scholes identifies transfer error and admits United should have paid whatever it took to seal deal