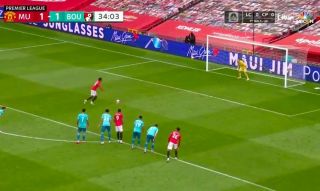 Manchester United have taken the lead through Marcus Rashford from the spot against Premier League outfit Bournemouth.

Having seen themselves go 1-0 down in a shock opener by Junior Stanilas after just 16-minutes the Reds have fought hard to get themselves back in front.

Youngster Mason Greenwood levelled proceedings up on 29-minutes with a stunning strike and just five-minutes later Ole Gunnar Solskjaer saw his side awarded a penalty after a Bournemouth handball in the box.

The young Englishman stepped up and cooly tucked it away. United lead as we head into half-time.

See the penalty converted by Rashford below, courtesy of NBC Sport: