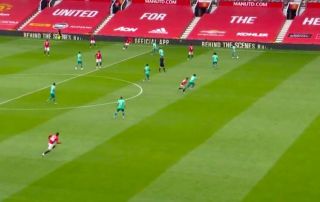 Manchester United wide-man Marcus Rashford reminded fans just what he has in his locker when he put a superb pass on a plate for team-mate Bruno Fernandes.

The 22-year old has looked lively in what is his fifth start in as many games for United since the sport restarted last month.

The young English talent has started the game against Bournemouth brightly with a stand-out moment coming early in the first-half when he delivered a delicious long-range ball into the box for the on-rushing Fernandes to latch on to.

Unfortunately Fernandes was unable to capitalise on the gift provided to him but let’s not take anything away from Rashford’s creative genius.

United have just fallen behind at Old Trafford after David De Gea was beaten by Junior Stanislas at his near post.

See the pass below, courtesy of BT Sport: