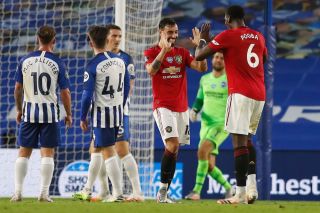 The Reds are looking to build on impressive league victories over Sheffield United and Brighton and have a great chance to put pressure on their top four rivals with Leicester City and Chelsea faltering in midweek.

Luke Shaw has started in all of United’s 15 game unbeaten run and is again given the nod this afternoon, despite the suggestion Brandon Williams would take his place.

As Stretty News reported late on Friday evening, Bruno Fernandes and Paul Pogba both start despite the Mirror claiming that the pair injured themselves in a collision in training at Carrington.

The pair will be protected by the imperious Nemanja Matic who will continue his role screening the back four.

Mason Greenwood retains his place on the right-flank after his goal and assist at the AMEX on Tuesday evening. The teenager will be looking to add to his goal tally in a dangerous front three alongside Marcus Rashford and Anthony Martial.