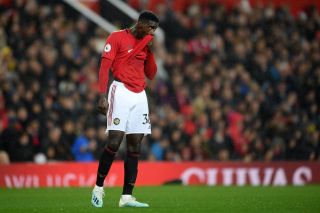 It’s sad to report Axel Tuanzebe is out for the rest of the season through injury.

The Manchester United defender, 22, hasn’t played football in months and Ole Gunner Solskjaer does not expect him to return until September.

Tuanzebe is not the only United defender out injured at the moment, with Phil Jones also sidelined. The manager doesn’t not expect Jones to be back playing football for another few weeks, but is he really going to risk putting him in games when United have so much on the line trying to qualify for next season’s Champions League?

I don’t mean any disrespect to Jones but he is not going to be playing games this season unless we’re stuck for defenders due to injuries at the end of the season.

However, there is something positive to take from Solskjaer’s injury update from today’s press conference. Right-back Ethan Laird made his United debut in the Europa League defeat at Astana in November but the 18-year-old has now been promoted to the first-team squad.

This is what Ole told the club’s official website: “Phil and Axel will still be out for a little while. It’ll be a few weeks before Phil can start training and Axel, we won’t probably see until September. Ethan is going to join the training group now.

“Of course there are a couple of knocks [after the Brighton win]. You do start feeling things now after a little bit, so there might be a couple of changes but let’s see today.

“The boys who didn’t play on Tuesday want to play and are ready to step in if they have to.”

Read more: Manchester United’s incredible stat that proves what transfer priority must be