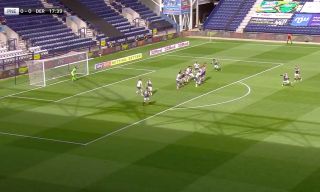 Wayne Rooney rolled back the years with a glorious match-winning free-kick for Derby County against Preston at Deepdale.

Manchester United’s top goalscorer of all-time was the best player on the pitch in the crucial Championship clash, controlling the game in a dominant Derby performance.

The 34-year-old has inspired his side to five consecutive wins in the division and the Rams are now just one point from the playoff positions with six games remaining.

Rooney, 34, still oozes class and while he may no longer be able to deliver at the very top level, there is a reason he will go down as  one of United’s greatest ever players.

See the free-kick below, courtesy of Sky Sports Football: