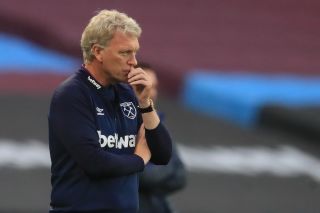 David Moyes may have failed as Manchester United manager, but he has just handed the Reds a huge boost in their race to finish in the top-four.

Moyes’ West Ham side secured a dramatic late victory over Chelsea on Wednesday evening to complete a near-perfect midweek of fixtures for United.

Third-placed Leicester City were dragged further into top-four battle with defeat to Everton at Goodison Park in the earlier fixture.

This was after Ole Gunnar Solskjaer had done their job so routinely with a 3-0 stroll away to Brighton & Hove Albion.

Wednesday’s results have offered United a wonderful opportunity to have Champions League football at Old Trafford next season, and the Reds could even sneak into third position if they take care of their winnable run of fixtures.

Of course, caution is needed as things can change very quickly. But if Solskjaer can field the same XI that starred in the last two league outings against Sheffield United and Brighton, they will surely fancy themselves.

We must also be wary of the threat of Wolves, who like United, have restarted in excellent fashion since the enforced break. Nuno Espirito’s side are currently in sixth behind the Reds on goal difference only, and will quietly be confidence that they can sneak into the top-four positions.

Moyes left Old Trafford without even a full season in charge after replacing Alex Ferguson, but he has finally done a huge favour for United fans in this crucial run-in.

United fans on social media have thanked the manager that was maligned during in time in charge at the club.

David Moyes is a man of his word. 👏👏🇾🇪 pic.twitter.com/OxwaDBcowf

What a day for us and we haven’t even kicked a ball. A huge, huge day in the run in for top 4 and one that may have completely swung the momentum our way for either 3rd or 4th. David Moyes, we always loved you!

Once a red always a red❤ 😊 pic.twitter.com/MqIpSRyw8k

Fergie was right when he said stand by him.