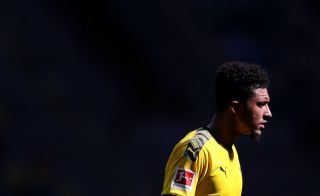 Manchester United saw off fellow Premier League outfit Brighton and Hove Albion in emphatic style tonight. The Reds produced arguably one of their best performances post Sir Alex Ferguson in a game which saw Ole Gunnar Solskjaer’s side dominate and not put a foot wrong from start to finish.

Solskjaer named his strongest available side in what is being dubbed his best eleven. The line-up featured all of United’s heavy hitters including the likes of recent hat-trick hero Anthony Martial and midfield duo Paul Pogba and Bruno Fernandes.

However, it was 18-year old Mason Greenwood’s inclusion on the right-wing over electrically paced Daniel James which was most intriguing.

Greenwood, who has been branded the ‘most natural finisher’ by his manager has been asked to feature on the right-side of an attacking front three more often than any other position on the pitch.

The decision to play the talented Englishman on the wing, opposed to more centrally in what could be considered a more familiar position for the youngster could be Solskjaer’s greatest contribution to United yet.

When deployed on the right-wing Greenwood boasts some pretty staggering numbers. In just nine appearances as a right-sided attacker the young talent has a highly-impressive 11 goal contributions (eight goals and three assists) to his name.

Today’s breaking news saw the United hierarchy claim to be adamant they won’t spend a penny more than £50m on long-term target Jadon Sancho, as per Sky Sports.

However, with performances as seen in Tuesday night’s game, the question really needs to be raised that perhaps the club need-not spend anything on a new right-winger. Does Solskjaer already have the answer to the club’s unresolved right-sided problems?

United’s in-balance of width and lack of attacking flair down the right-side of the pitch has been a long-debated cause for concern for the Reds. The draught of an explosive right winger can arguably be traced back to the days of Nani.

These concerns were undoubtedly the driving-force behind the club’s links to English wonderkid Jadon Sancho.

Ole’s equally exciting and ever-improving Greenwood could be the answer to the one problem the Norwegian’s predecessors never quite managed to solve.