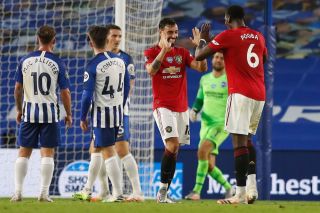 Manchester United eased to a 3-0 win over Brighton on Tuesday, with January signing Bruno Fernandes stealing the show and scoring two goals to add to his already impressive tally. His first was assisted by none other than Paul Pogba, adding more hype to the much-anticipated partnership between the two midfielders.

Asked about his partnership with Pogba after the match, Fernandes instead used the question as an opportunity to praise his teammates, as per The Guardian: “Paul is an amazing player but I don’t want to talk too much about me and him. We are a team, and this was a team performance. Talking about me and Paul isn’t fair on the rest of the lads, I would rather talk about everyone.”

The 25-year-old proceeded to produce the true words of a leader, pointing out the excellent performances of Pogba, Nemanja Matic, Scott McTominay and Fred over the past few months.

However, he also makes an excellent point — part of the reason why Pogba and Fernandes can succeed as a partnership is because of the depth and quality that United’s other midfielders provide. Pogba has occasionally struggled over the years, but has been excellent since returning from injury to four midfield partners in peak fitness and form, as well as an established identity in the side.

Watch a section of Fernandes’ post-match interview with footage courtesy of Sky Sports below:

🗣 “It’s not fair for the other guys if we just talk about me and Paul, Fred & Scotty did an amazing job, we are a team they push me to do better”

Bruno Fernandes on his partnership with Pogba pic.twitter.com/6KMA25XDNI

On Saturday, Ole Gunnar Solskjaer was able to trust Fred and Scott McTominay as his midfield duo, giving Pogba much-needed rest as he returns from a long-term injury. On Tuesday, Fernandes was substituted after 60 minutes to rest, with McTominay entering the fray and holding the fort down to guarantee United’s clean sheet.

While the supporting cast for Pogba and Fernandes is not flawless, and is likely to be improved this summer, United’s midfield has reached a level of depth and quality that gives Solskjaer enough options to rotate his side and still win matches.

McTominay and Fred were not at their best against Norwich but have largely been excellent this season, both hanging around the conversation for United’s Player of the Season award even if neither is likely to win it outright. Even still, it is arguable that neither make Solskjaer’s preferred XI, particularly given Matic’s form.

Matic was imperious against Brighton, completing 93.1% of his 87 passes and winning the ball back four times (via WhoScored). United have conceded just once in the defensive midfielder’s last six starts (via Transfermarkt), a great accomplishment which is in no small part due to Matic’s measured screening of the defence. The 31-year-old also produced a ridiculous pass to Mason Greenwood in the build-up to Fernandes’ second goal.

United’s coaching staff and board need to practice the words Fernandes preached in the post-match presser by continuing to build a squad with depth and quality. The performances from United’s players all over the pitch are a testament to what a healthy squad of top-notch footballers can offer, and the only way to improve further is to add even more quality to the ranks.

Even though almost every individual player in United’s starting XI performed brilliantly today and is a league-wide standout in their position, Solskjaer needs to continue to replenish his squad with a blend of youth and new signings.

Ensuring that these brilliant players have constant competition for places and can also rest matches will be crucial in deciding United’s fate in big competitions next season.