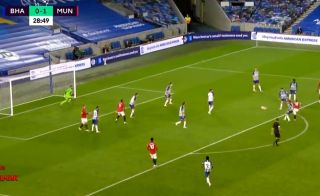 Bruno Fernandes has doubled his side’s lead over Brighton after being wonderfully assisted by Paul Pogba.

The ball may take a deflection on its way into the net but it would be very harsh if Fernandes wasn’t given the goal.

Brighton may call for an offside but highlights show Luke Shaw staying in line. It was Marcus Rashford’s pass to Shaw that opened our opponents like a tin of beans.

The goal came just minutes after Anthony Martial’s opener and United are playing some great football.

Hopefully they can push on now and finish this game before half-time. We were expected a tougher game tonight after Brighton’s recent form but United are proving too strong.