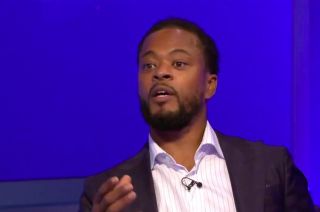 Manchester United great Patrice Evra has heaped praise on Bruno Fernandes for his impact since his January arrival from Sporting Lisbon.

Fernandes scored twice in Tuesday’s dominant 3-0 victory over Brighton at the AMEX, and was again at the heart of everything United did well in the final third.

Evra has been particularly impressed with Fernandes’ unequivocal desire to want the ball and said the club should thank him for making a huge difference in their race for to finish in the Champions League.

Fernandes was one of a number of exceptional United performers this evening, as Ole Gunnar Solskjaer’s side made it 15 games unbeaten in all competitions.

Mason Greenwood, who opened the scoring for the Reds, was also magnificent throughout.

But Evra opted to choose Nemanja Matic as his man of the match after another assertive performance from the Serbian protecting the back four.

Matic’s stability offers Fernandes and the excellent Paul Pogba the freedom to prosper further forward and his presence in United’s side cannot be underestimated.

Listen to Evra’s post-match thoughts below, courtesy of Sky Sports:

Bruno Fernandes was great and him and Paul in midfield is exciting but my man of the match was Matic with his performance. Enjoyed watching that United team. pic.twitter.com/LMC9LX0uw1