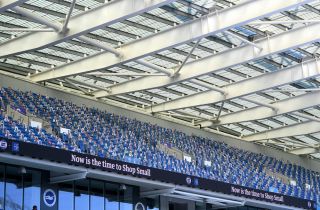 The Manchester United squad have arrived at The Amex Stadium ahead of tonight’s crucial Premier League tie as the Reds look to keep pace in the race for the top-four.

Ole Gunnar Solskjaer and his side have arrived on the South Coast in good time as they prepare to face-off against an in-form and tough to beat Brighton and Hove Albion side.

The Norwegian is expected to name several changes from the Red’s FA Cup Quarter Final tie against Norwich, with star-midfielder Paul Pogba expected to start.

United will be looking to extend their current 14-game unbeaten run when they face Graham Potter’s notoriously tough Brighton.

Read more: Opinion: Don’t read too much into Man United&#8217;s £50m limit for Sancho, this is just a warning to Dortmund