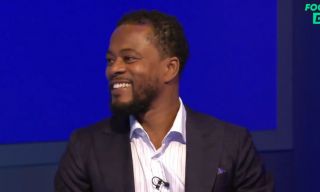 Patrice Evra is always full of smiles in the studio when covering games for Sky Sports.

Manchester United travel to Brighton in the Premier League and Evra names out some players who could make a difference in the game tonight.

Having made the difference off the bench against Norwich City in the FA Cup quarter-finals, Pogba is one of the United stars Evra expects something from, as well as Anthony Martial…

But this is when Evra’s analysis will draw a smile on your very own face.

Evra told Sky Sports, as seen in the video below: “Pardon my French, he [Martial] needs someone to kick his… everyday.”

Patrice Evra: "Pardon my French, he [Martial] needs someone to kick his… everyday." #mulive [@footballdaily] pic.twitter.com/uhcZLC7VdR

And he’s not wrong. Martial differently needs more encouragement than other players but I think Ole Gunnar Solskjaer has done a really good job with him since coming in.

Martial looks happier than he did under José Mourinho and scored his first hat-trick last week against Sheffield United.