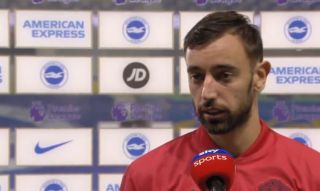 The Portuguese midfielder scored two goals against Brighton as Manchester United won 3-0 in their quest to climb up the Premier League table and into the top four.

Brighton were in great form ahead of this match after picking up four points from their two games since the resumption of the Premier League — against Arsenal and Leicester City — but they still face a battle in their fight against relegation, especially after dropping three points tonight.

Fernandes was pleased with his teammate’s performance after the game.

The Portuguese magnifico said: “It’s better because we didn’t concede goals, our defenders and David did an amazing job today.”

Although De Gea was rarely made work tonight, he stood strong behind a commanding defence and together they dealt with any danger thrown at them.

A conniving win for the Reds and a massive credit to Mason Greenwood and Fernandes for the goals!

Watch his post-match interview with Sky Sports below:

🗣 "It's better because we didn't concede goals, our defenders & David did an amazing job today"