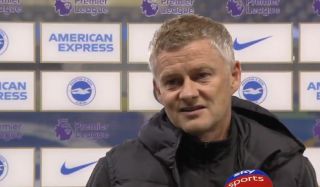 Ole Gunnar Solskjaer was very happy with his players after their 3-0 win over Brighton.

The better team won on the night as United cruised to a 3-0 victory and dominated the game throughout.

Tonight’s performance was one of our best of the season and it showed more proof that the jigsaw is finally coming together.

United had good width and dominated in the centre of the pitch, making them a very difficult opponent for Brighton to contain.

Watch Solskjaer’s post-match interview with Sky Sports below, where he says Greenwood is ‘a special kid’:

Greenwood replaced Daniel James on the right flank and it will be difficult for Solskjaer to take him out of then side after another impressive performance.

With United seemingly playing hard ball over the potential transfer of Borussia Dortmund’s Jadon Sancho, I wonder if we’ll see Greenwood start from the right next season. He’s got so much potential.