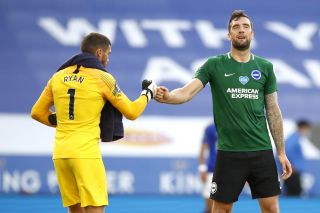 Manchester United’s weekend victory over Norwich extended their winning streak to 14 matches, forming the best stretch of form since Ole Gunnar Solskjaer arrived at Old Trafford. Traveling to 15th place Brighton on Tuesday, Solskjaer’s men are certainly favourites, but they come up against a deceptively talented side that could cause problems if the Red Devils are not at their sharpest.

Brighton have been more than decent since the restart, earning an impressive four points from matches against Arsenal and Leicester and creating a solid six-point cushion from the relegation zone. Regardless of quality, United have been flustered by Brighton’s tactical acumen and work-rate in the past, having failed to win at the AMEX Stadium since Brighton’s promotion in 2017.

Having rested for a week after the Leicester match, and given United’s difficult FA Cup tie over the weekend, Brighton’s talented midfield will set their sights on outrunning and outfighting a tired United side. United, before the lockdown, preferred to play on the counter, but with the return of Paul Pogba to play alongside Fernandes, Solskjaer’s side are also developing the ability to break teams down in possession, as seen in the dying stages of Saturday’s win.

Graham Potter’s side will attempt to nullify United’s game, sitting deep and overcrowding the midfield to frustrate Fernandes and Pogba. Against Arsenal, they started with a compact midfield five of Davy Propper, Yves Bissouma, Aaron Mooy, Pascal Gross, and Leandro Trossard, a combination of players that have every trait required to hurt most opposition.

Bissouma, the destroyer, sits deepest, and is excellent at breaking down opposition attacks, even when it comes to committing tactical fouls. Against Arsenal, he completed six tackles and two interceptions, and also committed a ridiculous six tactical fouls without receiving a yellow card (via WhoScored).

Mooy and Propper do their best to cover ground in front of Bissouma, both offering a level of assuredness on the ball. Propper tends to be the deeper of the two given Mooy’s slightly greater creative edge, which adds to his well-rounded game and led some to believe he would forge a career at Manchester City before he left in 2017.

From an attacking standpoint, Brighton’s best football tends to run through Pascal Gross. Joining Brighton in 2017, the German midfielder registered an impressive 7 goals and 8 assists in his first season in England after being one of the most prolific chance creators in the Bundesliga (via WhoScored).

Finally, Trossard offers the side’s width from the left flank. While his tricky dribbling will not significantly trouble Aaron Wan-Bissaka, his threat creates space for Brighton in the middle of the pitch, where the likes of Mooy and Gross can catch United out with service for Neal Maupay.

Where United will have relief is Brighton’s weakness in attack; none of the aforementioned players have shown end-product in the Premier League, but all five are required for them to survive this match, placing almost all of their attacking burden on the scrappy and aggressive Maupay.

The 23-year-old scored Brighton’s late winner against Arsenal and is just one strike away from hitting double figures this season, but he is also the only player at the club with more than five goals. Much of his action against Arsenal came from pressing and harrying opposition, which Brighton also did very effectively when they beat Jose Mourinho’s United 3-2 last season.

With new ball-playing signings Wan-Bissaka and Harry Maguire at the back, and Nemanja Matic showing good form in midfield, this should be less of a problem for United than it was that day, but on the other hand, United may struggle to break Brighton’s defence down.

Brighton tend to force teams wide and prevent deliveries into the box, with stalwart Lewis Dunk leading a host of very tall and aerially dominant defenders. As such, they are likely to target Marcus Rashford and Mason Greenwood, United’s wide players, and prompt them to create something for the in-form Anthony Martial, who is responsible for four of the six goals scored for United since the restart.

Rashford is out of form in front of goal but showed some creative prowess with two assists for Martial against Sheffield United. Much of Rashford’s effectiveness could be determined by who plays for Brighton at right-back; talented youngster Tariq Lamptey impressed against Leicester and Potter has declared him fit to start on Tuesday.

On the other wing, Greenwood is less experienced in the Premier League but has been in excellent form in his debut season, scoring 12 goals (via Transfermarkt). The 18-year-old has looked particularly effective in cameos since the restart despite struggling to find the net.

These two players, in current form, will be seen as the weaker of United’s forwards, but with their overall quality, they could be crucial in deciding the match.

Wan-Bissaka has improved in attacking areas of late, but if United want to drive into another gear, Brandon Williams could start at left-back over Luke Shaw. Shaw struggled in the final third against Norwich and is slower in transition than Williams, whose aggression and tenacity can drive United to quicker and stronger attacks. Williams would also be a low-risk selection given Brighton’s low threat from the right wing.

Overall, Tuesday’s result will depend on United’s ability not to make mistakes in midfield and defence, and to continue to improve upon the creativity shown in recent matches. Ultimately, a loss seems unlikely given the current form of Solskjaer’s side, but complacency cannot be afforded if United are to take all three points and continue to compete for a place in next season’s Champions League.