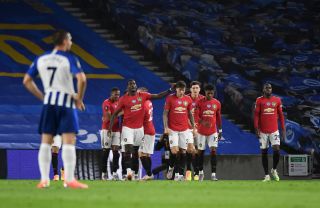 Manchester United faced-off tonight against a notoriously tough Brighton and Hove Albion side in what could have been a tricky tie to navigate in their pursuit to finish in the Premier League top-four.

Despite the pre-match nerves among fans, Ole Gunnar Solskjaer’s side soon proved they need-not have worried as the Reds brushed Graham Potter’s team aside in scintillating fashion.

The Reds arrived at The AMEX in good time this evening with manager Solskjaer reverting back to the same starting line-up which played so well against Sheffield United last week.

From the moment that referee Andre Mariner kicked the game off United were on the hunt to start quickly.

The entire team pressed high-up the pitch with what appeared to be a clear direction as to what they wanted to do with the ball once they had it in their possession.

The Reds came close to breaking the deadlock after just 12-minutes after midfield favourite Bruno Fernandes narrowly missed the target and hit the post in a shot set up by partner Paul Pogba.

However, just four-minutes later United broke-through after teenage-sensation Mason Greenwood burst down the right, skipped over the ball and unleashed a trademark left-footed finish low into the bottom right of the goal. 1-0 United.

As the game progressed it was clear Solskjaer’s well-balanced side had no intention of letting up, successfully managing to reduce Brighton’s best efforts to virtually nothing.

Just a few seconds shy of the half hour mark Fernandes doubled lead with a low driven shot which was laid off by Pogba, which found it’s way into the right side of the goal. 2-0 and United were well on their way to securing all three-points.

Elsewhere, experienced holding-man Nemanja Matic had yet another impressive performance proving he is the key ingredient to United’s tasty midfield.

The Serbian seamlessly stitched all of United’s moves together and successfully dictated the tempo of his side’s transitions.

Arguably Matic’s best moment of the game came just five-minutes into the second half when centre-back Harry Maguire cleared a ball played over the top by Brighton which fell into the Serbian’s path. Matic controlled the ball well and instantly pivoted and sprayed the ball out wide to an on-rushing Mason Greenwood.

Matic’s positional awareness and technical brilliance proved essential in a stunning counter-attack which eventually led to the Reds scoring a third; the goal which saw Fernandes bag a brace.

The 25-year old attacking midfielder has now been directly involved in eight goals in his first eight Premier League games (five goals and three assists) – something only Van Persie can claim to have done too.

Manager Solskjaer decided just 10minutes later that he had seen enough and felt comfortable enough with his side’s lead to make three changes. Pogba, Fernandes and Luke Shaw all made way for Scott McTominay, Andreas Pereira and Brandon Williams, respectively.

Left-back Williams came close to making it 4-0 after just two-minutes of being on the pitch when fellow full-back Aaron Wan-Bissaka crossed a ball into the centre of the box for Williams to get his head onto. The young Englishman’s effort was narrowly blocked denying him his second ever professional goal.

At the turn of the 78th minute Solskjaer opted to use his two remaining allowed substitutions and brought on Daniel James for Marcus Rashford and Odion Ighalo for Anthony Martial. Solskjaer’s like-for-like changes signalled his desire to see out the game in the same fashion they had started it; offensively.

During the last 10-minutes, the game naturally slowed as the Red’s opposition tired as a result of seeing just 30% of the ball.

Young winger James came close a few minutes from the end after a right-footed effort at the edge of the box was saved by keeper Mat Ryan.

Referee Mariner blew the final whistle after three-minutes injury time in a gesture which saw the south coast opposition breathe a sigh of relief.

Solskjaer’s United were thoroughly rampant in what was their fourth game back since football got back underway. His side once again did not appear to tire, nor did they put a foot wrong throughout the entire match in what was believed to have the potential of being a tricky away tie in United’s pursuit for Champions League qualification.

United’s dominating and at times scintillating performance sees them extend their impressive unbeaten run to 15-games in all competitions.

The thoughts of manager Solskjaer and Man of the Match Fernandes reiterated the sense unity among the squad with Fernandes refusing to speak exclusively about his and Pogba’s partnership instead, opting to credit the rest of the squad. Elsewhere, Solskjaer paid tribute to ‘special’ youngster Greenwood’s performance.

Overall, United played one of their best games in a long, long time. The side looked refreshed, stronger, quicker and more decisive in every area of the pitch.

The Red’s constant desire to dictate the game proved to be too much for Brighton who were never really allowed to get a foot-hold in the game. The squad’s work-rate and determination to be first in every duel allowed them the movement and creative freedom to be explosive on the counter-break and controlled in possession.

Solskjaer and his flourishing squad will now be looking ahead to their next domestic game against league strugglers Bournemouth on July 4.